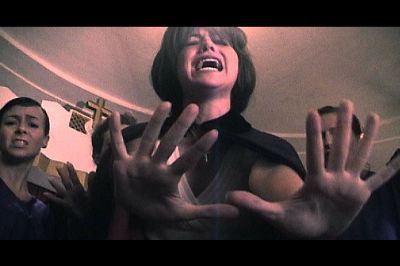 THE CAST OF "SISTER AIMEE: THE AIMEE SEMPLE MCPHERSON STORY"
MIMI MICHAELS: Newcomer Mimi Michaels (pictured above in a hands-on healing prayer scene that moves theatre audiences) is Oscar-worthy in her portrayal of SISTER AIMEE from her teenage years through her controversial death at age fifty-four. Mimi went to LaGuardia Highschool, the "FAME" high school for the top young actors in the country, where she excelled as Best Actress.
RANCE HOWARD: The Christian Examiner recently reviewed, "Rance Howard delivers a strong performance as JAMES KENNEDY..." Rance is a veteran actor in films like "Ed Wood," "How the Grinch Stole Christmas," "Chinatown," and scores of others. He is the father of Ron Howard, Clint Howard, and grandfather of Bryce Howard. He plays a simple farmer, the father of Aimee who knows her better than anyone.
KIERA CHAPLIN: Stunning blue-eyed, blonde-haired Kiera is the granddaughter of Hollywood royalty Charlie Chaplin. "I'm grateful to act in this film because my grandfather loved Aimee as a close friend and was touched by her amazing sermons." Supermodel Kiera plays the sexy temptress MYRTLE STE. PIERRE, the villain who plots to destroy Aimee.
TERES BYRNE: In addition to her stellar performance as Aimee's mother, MINNIE KENNEDY, Teres is a member of a Foursquare church. Aimee is concerned about the mission, while Minnie watches the money, leading to notorious tension.
CHAD NADOLSKI: Chad delivers a spot-on performance as Irish evangelist, ROBERT SEMPLE, who converts Aimee out of atheism and marries her when she was just seventeen. With no money in their coats, they sail to China as missionaries.
CARL BALLANTINE: Comic legend from "McHale's Navy," and magician "The Great Ballantine," Carl portrays the realtor and compatriate in Hong Kong who first meets Robert and Aimee on their fateful mission in China. This was Carl's last feature film before he died.
CHARLES HOYES: Beloved actor from "Field of Dreams," Charles portrays Aimee's second husband HAROLD MCPHERSON, a man torn between his wife's love for Jesus, her "heavenly husband," and her desire to follow in Robert's footsteps as a preacher. He is as pragmatic as Robert is spiritual, and eventually the marital fights escalate to separation. "I'm tired of being Joan of Arc's husband," he says.
MICHAEL MINOR: Dashing radio operator of Aimee's pioneering gospel station KFSG, he becomes the focal point of sizzling rumours and a 1926 front-page morals trial in Los Angeles court that threatens to destroy Aimee's temple.
ETIENNE ECKERT & LAURIE SHAW: Aimee's two closest associates, Etienne portrays dear, sweet, EMMA, the only witness to Aimee's mysterious disappearance at Venice Beach. Laurie portrays REBA. Reba preaches in Aimee's stead when she is away on tour. Is she holding the ministry accountable out of pure motive, or is she Aimee's Judas, motivated by self-righteousness and ambition?
RICHARD ROSSI: Writer-Director, Richard also portrays Aimee's third husband, DAVID HUTTON, a guitar-strumming vaudevillian who is just as home in the speakeasies as he is preaching in the pulpit. He breaks Aimee's heart.
BARBARA KERR CONDON: Barbara portrays SISTER MARIA, Aimee's spiritual mother, who first tells her about Robert's revival meetings. Later, she meets Aimee at the height of her fame in Los Angeles, and prophesies the Evil One will attempt to destroy her, because the "greater the anointing, the greater the accusation...."
CHARLES GORGANO: Charles is excellent as District Attorney Asa Keyes, Aimee's adversary in the 1926 trial of the century. Aimee told her story of being drugged and kidnapped, but Keyes and the police accuse her of immorality and obstruction of justice.

Email us today elmergantrycasting@gmail.com or visit our Facebook page at http://www.facebook.com/SisterAimee to receive insider updates on our films. We are building a community of avid Aimee fans. Please stop by again for updated info. Thank you for your interest!

The page cannot be displayed.