"Sister Aimee: The Aimee Semple McPherson Story" was admitted as a finalist in the Feature Film Category of the prestigous Sabaoth International Film Festival in Milan, Italy.

The Screen Actor's Guild work-in-progress screening of the rough-cut of "Sister Aimee: The Aimee Semple McPhersonStory " filled up with reservations within twenty-four hours of union members being notified. Director Richard Rossi was told by the owner of the New Beverly Cinema that the rough cut screening of "Sister Aimee: The Aimee Semple McPherson Story" was the best attended digital film in the historic theatre's Hollywood history. The screening at the Stella Adler Theatre in Hollywood was so full people were sitting on the floor in the aisles.
"I'm amazed by the response," Rossi said. "I want everybody to see the film who wants to see it, and I'm trying the best I can to shoehorn in people as my guests when they contact me begging to get in. We want to continue to take the film to more and more people who desire to experience the inspiration of the movie."
DIRECTOR RECEIVES WORLDWIDE INQUIRIES 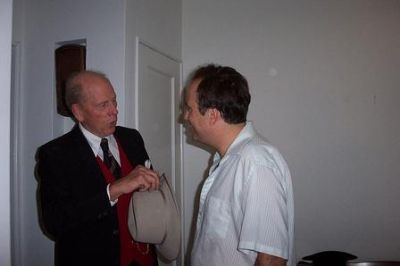 Rance Howard (above left), confers with director Richard Rossi before shooting a scene in which he restores Aimee's faith in what Christ accomplished through his death and resurrection.

People of faith as well as a large crossover interest of people drawn to Aimee because of her role as a pioneering woman and because of the controversies swirling around her. We are pleased to announce both Aimee films  are available at Amazon for the price of one under title "Richard Rossi 5th Anniversary of Sister Aimee." Email us at elmergantrycasting@gmail.com and let us know of your interest in the movie about fabled female faith healing evangelist Aimee Semple McPherson.

Richard Rossi, Writer-Director
This is the official website of the feature film "Sister Aimee: The Aimee Semple McPherson Story" and the documentary film "Saving Sister Aimee." Both are available together at last in the Amazon "Richard Rossi 5th Anniversary of Sister Aimee" edition which includes bonus materials & remastering of the films.